What to do about inattentive driving? 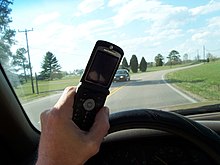 Editor’s note: This is an early column (from April 2007) where cellphones with texting while driving was becoming a common problem. GPS systems and dash panel cellular phone connections were in their infancy, indeed, so were the earphone systems that enable hands-free driving. The problem has gotten worse, however, as texting while driving becomes no big deal for tens of thousands of inattentive, unskilled drivers behind the wheels of mastodon-sized vehicles. These are the same individuals who feel ‘he-said, she-said’ is soooo much more important that paying full attention to the road; the process of natural selection will eventually weed these individuals out… unfortunately, taking plenty of innocent persons with them. Great argument for mass transit and jitneys. — bw

This afternoon I’m out in my “enthusiast” vehicle as a third “cellphone shuffle” occurs at a stop sign—a movement requiring the utmost dexterity: END_OF_DOCUMENT_TOKEN_TO_BE_REPLACED