More solid ideological substance than given credit for… 8/10 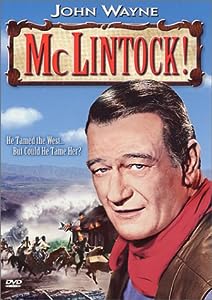 … or what the majority of fans would have watched it for back in the day. McLintock was a big, successful action-packed movie in the the early 60s around the time of the assassination of President John F. Kennedy and just before the buildup and war in Vietnam that tore the country apart. But I don’t remember having seen it at the local theater. A reader, Neil, recommended McLintock to me for various pro-liberty sentiments and principles expressed in much of the movie’s dialog and action. And he’s right: the writers have the protagonist GW McLintock (John Wayne) making strong statements in favor of property rights, personal responsibility, productive ambition, fair treatment of Indians as individuals, and the detrimental, illogical effects of most government activity.

A couple of trivia points from IMDb to corroborate the above:

Then from the quotes page:

McLintock: I’m McLintock. You people plan to homestead and farm the Mesa Verde.

Settler: Yes, sir. The government give each of us a hunerd and sixty acres.

McLintock: The government never gave anybody anything. Some years back a lot like you come in. Had a pretty good first year. Good summer. Easy winter. But the next year the last rain was in February. And by June even the jack rabbits had sense enough to get off the Mesa.

Devlin Warren: I don’t know what to say. Never begged before. Turned my stomach. I suppose I should have been grateful that you gave me the job.

McLintock: Gave? Boy, you’ve got it all wrong. I don’t give jobs, I hire men.

McLintock: Agard, if you knew anything about Indians, you’d know that they’re doing their level best to put up with our so-called ‘benevolent patronage’ in spite of the nincompoops that’ve been put in charge of it!

McLintock: Becky! Come here. Somethin’ I ought to tell you. Guess now’s as good a time as any. You’re going to have every young buck west of the Missouri around here tryin’ to marry you – mostly because you’re a handsome filly, but partly because I own everything in this country from here to there. They’ll think you’re going to inherit it. Well, you’re not. I’m going to leave most of it to, well, to the nation really, for a park where no lumbermen’ll cut down all the trees for houses with leaky roofs. Nobody’ll kill all the beaver for hats for dudes nor murder the buffalo for robes. What I’m going to give you is a 500 cow spread on the Upper Green River. Now that may not seem like much, but it’s more than we had, your mother and I. Some folks are gonna say I’m doin’ all this so I can sit up in the hereafter and look down on a park named after me, or that I was disappointed in you – didn’t want you to get all that money. But the real reason, Becky, is because I love you, and I want you and some young man to have what I had, because all the gold in the United States Treasury and all the harp music in heaven can’t equal what happens between a man and a woman with all that growin’ together. I can’t explain it any better than that.

McLintock not so liberated when it comes to women…

The above statement GW offers to his daughter ends with an ideal-world view of a man’s wanting to love and grow old with a woman through thick and thin. GW is also shown to be hopelessly still in love and lust with his separated wife Katherine (Maureen O’Hara). But you can tell GW still clings to the old ways of ‘me Tarzan you woman’ in his strategies to win back the fiery Katherine—who likes the finer things and has been associating with more politically correct, but less manly men like the governor. [The movie inspired by Shakespeare’s Taming of the Shrew.]

McLintock was released in the same year as Betty Friedan’s The Feminine Mystique, which launched the women’s liberation movement. So many cultural shifts and divides were set in motion in the 1960s, perhaps none so fundamental as women coming into their own. [Until that time in many states, women were known as either Miss <maiden name> or Mrs. <husband’s surname>. Often, a married woman could not have her own bank account or have her full name listed in the phone directory.] And you can tell the writers and the Duke himself felt some awkwardness toward how to deal with the new independent woman. Which leads to a fairly regressive climactic scene.

The producers made a blockbuster, big-country movie that people flooded the theaters to see. Personally, I’ve been through so many high-budget, good-natured brawls and

breakup/makeup scenes of the jealous woman and hard-living tenderhearted man that I’m all clichéd out. But I do find that the writers deftly lay in a fine set of ideas, with characters worthy of them, among the slapstick sequences catering to the cheap seats. McLintock is ‘different’ for the genre, and definitely worth a visit or a revisit.