Do you think all bizarre human symptoms must be caused by a germ?
by Jon Rappoport 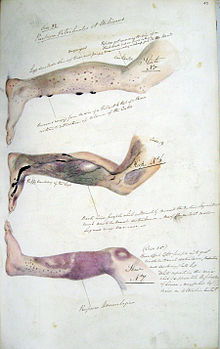 Read this, from the Journal of Applied Nutrition, Volume 15, 1962, “Have We Forgotten the Lesson of Scurvy?” by WJ McCormick, MD (reprinted at selene river press):

“From the 14th to the 19th century, scurvy took the lives of millions annually in Europe and Asia. From 1600 to 1800, it is estimated that fully a million English sailors succumbed to this disease. In the early history of these pandemics the designations “Plague” and “Black Death” were used…the characteristic symptoms: multiple hemorrhages under the skin (red, purple and black spots and hematoma) and [hemorrhages] from all mucous membranes—gastrointestinal, pulmonary and genitourinary…”

People use the fact that major hemorrhaging is occurring to assign the cause to a germ—“it must be the Ebola virus, what else could cause such bizarre effects?”

Well, now you know what else.

The point is, millions and millions of people can die without a germ as the cause.

Of course, the medical cartel would like us to remain ignorant of that fact. Trillions of dollars and the entire basis of disease research are at stake.

The mantra? Find the germ, fear the germ, develop drugs and vaccines for the germ.

Am I saying that every Ebola patient is really suffering from Scurvy? Of course not. This article isn’t about Scurvy.

The majority of people who die on planet Earth in 2014 are dying from starvation, malnutrition, contaminated water, lack of basic sanitation, overcrowding, poverty, war—and the idea that medical drugs and vaccines will stem that tide is absurd and insane.

Would you give a starving person drugs instead of food?

Would you pump him full of antibiotics, which destroy all bacteria in the gut, thereby reducing his ability to absorb what little food he can find?

Would you inject him with vaccines that contain germs and toxic chemicals, pushing his immune system, which is already on the edge of failing, over the cliff?

Remember this: when people are drinking contaminated water (sometimes pumped directly from sewage into the drinking supply), when they are profoundly deficient in all vitamins and minerals, when they are starving, when they are subjected to very toxic chemicals spewed from industrial factories, when they are living far, far below the poverty line, when they are driven from their homes and even their countries during war, the “symptoms” these people present are going to be quite horrific and shocking and strange and unpredictable.

The media will keep repeating “the germ, the germ.” But that doesn’t make it true.

Take 100 people from Scarsdale or Beverly Hills, who are living very comfortable lives, and fly them to some distant location, put them all in a six-room apartment with rats and lice, feed them a tiny portion of rice and melon every day, give them water to drink that’s polluted with industrial waste and human waste, and then a year later check back in and record all their symptoms—and I guarantee you’ll find some “bizarre” effects.

Test them all for the presence of germs, and you’ll find as many viruses and bacteria as you want to….