Full article at Steve Harry’s site, you may have to go to the directory to locate page. (Title of article: “End collective bargaining for public employees”.)

The Public Employment Relations Act (PERA) is the state law that requires local governments and public schools in Michigan to engage in collective bargaining. It never was a good idea, but recently it has been seen – by me, at least – as a major cause of underfunded pension systems and an obstacle to solutions.

I’ve posted several stories here about underfunded pension and retiree heath care systems. The most recent said Lansing’s debt amounts to $16,000 per household and that pension systems in 80 of Michigan’s 100 largest cities are underfunded.

The National Labor Relations Act was passed and signed into law by President Roosevelt in 1935. It does not apply to government employers:

The term “employer” . . .  shall not include the United States or any wholly owned Government corporation, or any Federal Reserve Bank, or any State or political subdivision thereof . . .

Collective bargaining for public sector employees did not come to Michigan until 1965:

In the 1964 election, President Lyndon Johnson won in a landslide, and his coattails helped many other Democratic candidates. Michigan Democrats won large majorities in both houses of the state legislature in the 1964 election, their first majorities in either chamber since 1937-1938, and enactment of a prounion public sector bargaining law was one consequence of those majorities. On July 23, 1965, Governor George Romney, a liberal Republican, signed the Public Employment Relations Act (PERA), 1965 PA 379. . . PERA granted bargaining rights to public sector employees [and] defined and prohibited unfair labor practices (ULPs) . . . (source, pages 107-108)

The Michigan Labor Relations Commission (MERC) was given responsibility for administration of the labor relations and mediation functions of the Act.

Pensions for public employees existed long before PERA, but they increasingly became a way to boost total compensation. With the public’s soft spot for old folks, generous pension plans were easier to accept than high wages, and the complexity of the pension calculation made the long-term consequences less understood.

For school and local government administrators, it was also a way to kick the can down the road – satisfy union demands without damaging the current budget. And many of those same administrators, if not enthusiastic supporters of the union movement, appreciated the unions’ campaign contributions and endorsements.

The formula for calculating pensions is typically years of service times final average compensation (FAC) times a multiplier (for example, 1.5%). The FAC factor is the least understood.

FAC is the average earnings for the employee’s best 2, 3 or 5 years, almost always the years immediately prior to retirement. There are several ways to increase FAC. Since FAC often includes payoffs of accumulated sick and annual leave at retirement, it is to the employee’s advantage to to save up as much as allowed. This practice is called “pension spiking.”

Other ways to increase FAC are achieved in the collective bargaining process. Step wage increases based on experience increase FAC. For teachers, advanced degrees – often earned while on the job – also boost salaries by an average of $10,000. Whether these salary increases are justified by improved performance in the classroom is questionable, but they do serve to increase FAC and the pension. The following is from a study of Michigan teachers done in 2005. It shows that veteran teachers with master’s degrees make over twice as much as starting teachers: 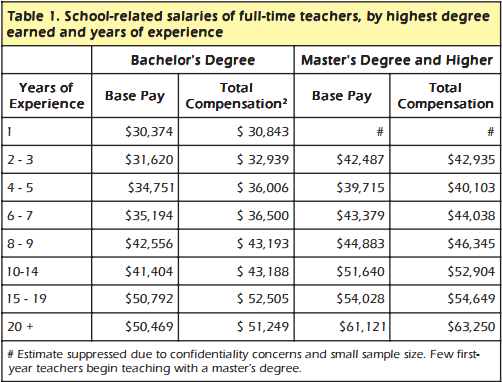 FAC can also be increased by including in its definition as many types of pay as possible. For example, for a Lansing firefighter, FAC includes

Another way to increase FAC is by making the FAC period as short as possible, maximizing the average:

The third factor in the pension calculation is years of service. Ordinarily, an employee can increase his pension by staying on the job longer. That is not always the case, however. Although mandatory retirement age for Lansing police is 60 and firefighters is 70, they get a maximum 25 years service credit. State Police are also limited to 25 years. All can retire at any age after 25 years.

While retiring with as little as 25 years of service does not boost the pension amount, it increases costs to the employer by increasing the number of years the pension will be received. This is the downside of “early out” programs often pushed by unions as well as employers as a cost-saving measure with the claim that reducing staff or replacing higher-paid veteran employees with lower-paid new employees will reduce costs. Examples: Lansing Teamsters in 1992, Lansing School District in 2005, Lansing firefighters in 2011.

Changes to the pension systems were recommended by Lansing’s Financial Health Team in their 2013 report….

Full article at Steve Harry’s site, you may have to go to the directory to locate page. (Title of article: “End collective bargaining for public employees”.)