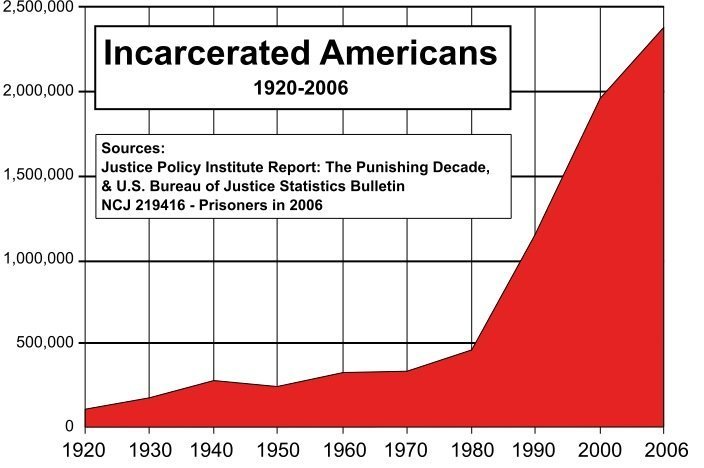 I profoundly dislike being in prison. But I have an advantage that most inmates don’t. I have power and influence enough to attract media attention to my case. I have a supportive circle of professionals, family and friends – all of you – who stand by me and cry in outrage against injustice!

Because I am so richly blessed, I am obligated to be a voice for the invisible prisoner, the one without a voice. So though I am not a drug offender, I continue to support this important prison reform movement.

Eric Holder, the U.S. Attorney has urged the reduction of non-violent drug sentencing both in the future and retroactively. It is estimated that if all non-violent drug offenders serving time were considered for retroactive sentence reduction, some 50,000 of the more than 215,000 inmates in the overcrowded federal prison system would be eligible. USA Today The War on Drugs has cost the American Tax Payer.

I believe that as important as the reforms Holder and the Sentencing Commission support are to a smarter, fairer prison system, he has not gone quite far enough.

Consider this. Recently Florida’s U.S. Congressman Trey Radel got busted for buying and possessing “powder cocaine”. He is rushed to a U.S. Attorney and charged with a misdemeanor and given probation. He is dubbed the “Cocaine Congressman” and he retires his post. He’s to seek treatment. But no felony charge on his permanent record. No prison time that would take him from his family.

This is a reasonable approach to drug usage, and I believe that his case was handled correctly; but I know, because I am in federal prison, that if the Congressman had been a young Black man on the streets of Anywhere, U.S.A., a cocaine deal might go down like this:

The “powder cocaine” would be mysteriously become “crack”, carrying a harsher sentence. “We’ll give you till sundown to give us the name of someone bigger”. Then he’s curiously made part of a drug conspiracy to possess, with the intent to distribute “crack cocaine” and would be sentenced on the word of other felons who have been promised lighter sentences for pointing the finger at him.

The young Black man is now facing ten to twenty years in federal prison for being an addict and committing a non violent offense.

My friends, it happens all the time. Politicians want to be “tough on crime”. They get reelected or promoted that way. It’s good for professional advancement. Whoever heard of an elected official moving up the ladder if he is attacked by his opponent for being “soft on crime”?

Please tell Eric Holder to “get tough on Justice!”

You have given millions of people a sense of hope. We are thankful. I applaud you for supporting sentencing reform.

More than half of America’s 2 million plus prisoners are there because of drug charges. Men of color get hammered by the government. Easy prey. Little sympathy. No loud or important or powerful voices for fair treatment or a light sentences.

Politicians can espouse “locking them up and throwing away the key”. It’s good politics to be “tough on crime”.

Attorney General Holder, direct your subordinates to follow your proclaimed public policy mandate. It’s time to seek equal justice for those for whom equal justice is just a dream.

Attorney General Holder, get the ball rolling with an executive order to all U.S. Attorneys. Stop the stings, stop the entrapments, stop the charges of conspiracy. If someone has drugs, charge them with the drugs they have. Tell the justice department that ‘cooking the books’ to drive up prison time is fraud.

Last but not least, stop the grants to law enforcement for drug task forces that get local law enforcement agencies addicted, yes financially addicted, to federal grant money so they then have to keep up the arrests, convictions, and long sentences to justify getting more federal money in next year’s budget.

We should encourage U.S. Senators Pat Leahy, Rand Paul, Sheldon Whitehouse and the many U.S. House Members who are speaking out on criminal justice reform. Our 42 year “war on drugs” has cost taxpayers approximately $2.5 trillion, with 45 million arrests, and nearly 7.5 million people in prison or under government supervision at a cost of billions of tax dollars each year. And most of those are non-violent.

We could save costs and lives….if Congress passes sentencing and prison reform.

Thanks for fighting for Justice. Together we can put some Justice back into the InJustice System!