As the 19th Century turned over to the 20th, John Davidson Rockefeller’s Standard Oil Trust was coming under increasing public pressure, receiving mounds of bad publicity and was even beginning to feel political pressure even as the company amassed more power.

In 1892 the Ohio Supreme Court had declared the Standard Oil Trust to be an illegal monopoly and ordered its dissolution. The company complied with the court’s order in appearance, but in reality the directors and trustees all held their power and positions and, if anything, the company just amassed more power and wealth as it diversified.

U.S. government action to break up the Trust began in earnest in 1901 with actions to charge the Trust with violation of the Sherman Anti-Trust Act that had been passed in 1890. In addition to oil and gas companies, refineries, transportation companies and banks, Rockefeller owned politicians and the political process.

So Rockefeller, the richest man in the world, was becoming “the most hated man in America” by virtue of the negative press over his monopolistic practices and his bucking of the government’s actions to break it up. Now he sought to own the public relations by bribing public opinion through a pretended interest in their health. [1]

Whether for truly philanthropic and altruistic motives – as court historians claim – or for more nefarious ones, Rockefeller founded the Rockefeller Institute for Medical Research in 1901. He did so at the behest of his right hand man, Frederick Taylor Gates – a former Baptist “modernist” minister who was really a charlatan with a penchant for amassing wealth under the guise philanthropic fronts. In other words, Gates would have made great television evangelist had television been in existence during his heyday.

Rockefeller brought in some of the nation’s top medical men on offers to pay them an average $20,000 per year each (almost $500,000 when adjusted for inflation) for 10 years to “stimulate medical research.” For that and for funding the Rockefeller Institute Hospital and providing grants to address public health concerns (like the bacterial contamination of the New York milk supply), Rockefeller received good publicity. The research they churned out resulted in dozens of medical patents that Rockefeller used to amass more wealth.

The medical education field was growing one in the early 20th Century with the homeopathic and allopathic schools of thought competing for dominance. Medical schools were springing up across the country – some of good quality and some more dubious. Rockefeller and Gates had as their ultimate goal the control of medical education, its prestige and its profits.

Rockefeller created the General Education Board and established Gates as the head. Gates’ medical experience consisted of his father’s medical education. Gates’ father, however, never practiced medicine and instead became an itinerant preacher. Rockefeller’s medical education also had come through his father. “Doc” William Avery Rockefeller was a snake-oil salesman who peddled a tonic called Rock Oil that he claimed would cure cancer.

In 1910 the Rockefeller-Gates General Education Board combined with the Carnegie Foundation and the American Medical Association to buy their way into controlling interests in the major medical schools and propped them up with grants and “securities” to fund medical education and began a campaign of calumny and slander against those schools in which the socially and religiously elect political bosses had no interest. The competing schools were represented as low-grade and inferior.[2]

This forced the shuttering of over half the medical schools in the U.S. This gave the Rockefeller-Gates/Carnegie/AMA cabal total control over medical education and licensing in the country and granted them the power to dictate how medicine could be practiced and who could practice it.

Meanwhile, the Rockefeller Medical Institute was churning out medicines and distributing their manufacture to various Rockefeller-owned drug companies, including IG Farbenindustries in Germany – a conglomeration of six major German pharmaceutical companies. (A side note, the IG Farbenindustries building is the only German building the allies were forbidden from targeting during World War II, and it survived the war virtually unscathed.)

Once they’d essentially taken over the drug manufacturing industry, the Rockefeller-Gates/Carnegie/AMA cabal not only controlled who could practice medicine and how medicine could be practiced in the U.S., it also controlled which drugs could and could not be prescribed. And it required the prescribing of the drugs based on profit rather than whether they were effective or even harmful.

Fast forward now to the 1950s and rise of the “polio epidemic.” A polio epidemic was indicated by the medical powers as when an area saw 35 cases per 100,000 in a given year. The number of polio cases in the U.S. increased until 1952 when it peaked at around 58,000 cases with about 3,200 deaths: This in a nation of 157.6 million people, as shown in the graph below from ProCon.org. 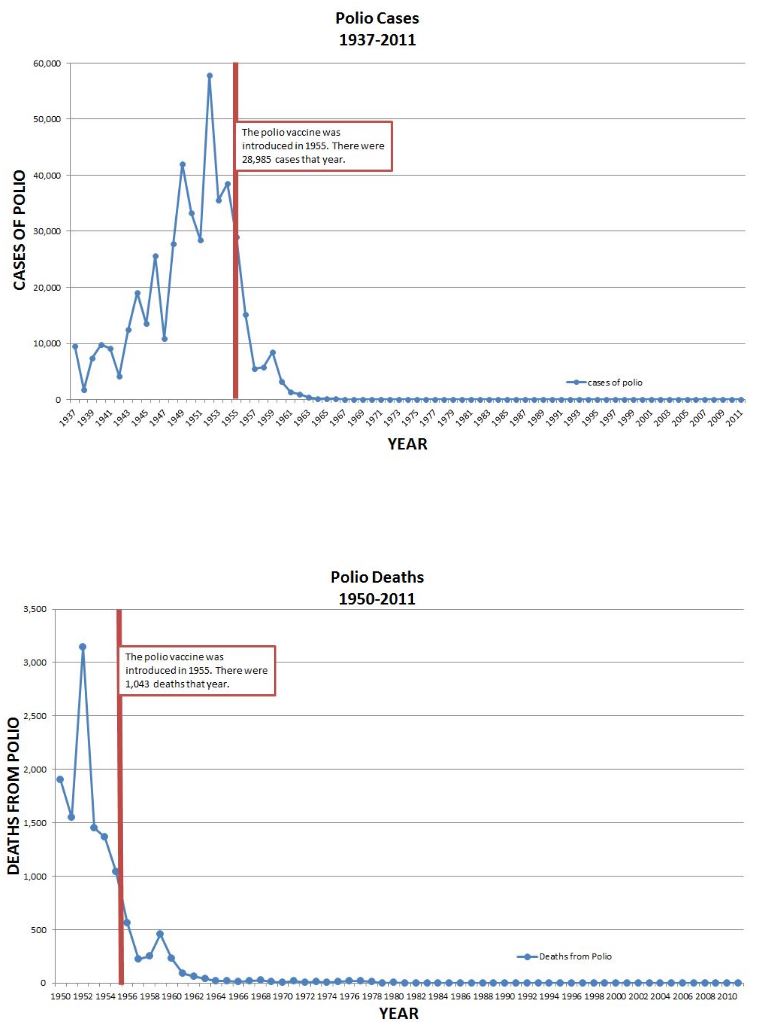 On April 12, 1955, the U.S. government licensed the Jonas Salk vaccine which contained an inactivated polio virus. Less than a month later the vaccine was suspended to investigate cases of paralysis caused by the vaccine. After changes were made to production methods the vaccine was program was restarted on May 27. In August of 1960 Albert Sabin, M.D.’s oral polio vaccine was licensed and recommended by the U.S. Surgeon General. Salk’s vaccine was phased out in 1968.

The Rockefeller Institute for Medical Research, the Roosevelt Warm Springs Foundation and The National Foundation of Infantile Paralysis (March of Dimes) combined forces to push a PR campaign to turn polio into a major health crisis and promote the need for vaccines. PR master Carl Byoir and stars like Sammy Davis Jr., Tennessee Ernie Ford and Lucille Ball were employed to promote the need for the Salk polio vaccine[3].

But by the time the vaccine began to be used on Americans the number of polio cases had declined to 28,985 with 1,043 deaths. Polio cases in England and Wales were also dropping precipitously, with no vaccine.

In 1956, six New England States reported sharp increases in polio rates, from more than double in Vermont to 645 percent in Massachusetts, despite — or rather because of — the polio vaccine program. Idaho and Utah saw such an increase in polio cases and deaths they halted the vaccine program.

Salk was, in fact, a medical criminal on the order of Josef Mengele who used Federal funds to conduct medical experiments on helpless patients at a Michigan insane asylum.

The Rockefeller-controlled pharmaceutical companies — which benefitted financially from the polio outbreak, with Byoir in charge of the public relations — funded the writings on the history of polio and its treatment. As such, the pharmaceutical companies were presented in the best possible light. Americans were not told about the many people who developed paralysis after being vaccinated against polio. Nor were they told about David Bodian, M.D., Ph.D., from the Poliomyelitis Laboratory at Johns Hopkins University. Bodian told the International Poliomyelitis Conference in 1954 — the year before the polio vaccine was introduced — injections and other vaccines, such as the DTP vaccine, “may be causing polio.”

Polio’s rise in the United States coincided with an increased use of pesticides in the 1950s, many of which were byproducts of chemical weapons manufactured during World War II. These pesticides were found to increase susceptibility to viral infections, studies showed. Exposure to pesticides also came through milk, which was heavily contaminated with pesticides and from crops being dusted with government-approved pesticides. Much of the milk had to be destroyed, according to a U.S. Senate report.

Researchers recognized a higher incidence of polio among those who had undergone tonsillectomies. Ice cream, made from contaminated milk, was commonly given to children following tonsillectomies. And tonsils play a key role in warding off infections — a role not understood in the mid-20th Century.

The “decline” in suspected polio cases in the U.S. can be traced to sleight-of-hand by the Centers for Disease Control and Prevention, which over the decades following 1950 began to reclassify what was and was not considered polio.  In other words, over the last 60-plus years the CDC eradicated polio by simply giving a different name to diseases that would have in the 1950s been called “polio.”

In 2002 the journal Lancet published a study showing that about half of the cases of non-Hodgkin’s lymphoma being diagnosed annually were linked to a monkey virus called SV-40. SV-40-contaminated polio vaccines were given to a generation of Americans in the 1950s and 60s. SV-40 is now being found in brain and bone tumors and in other cancers previously rare that are becoming more prevalent. It has also been detected in lung cancers and lymphatic cancers.

Former Food and Drug Administration virologist John Martin said, “SV-40 infection is now widespread within the human population almost certainly as a result of the polio vaccine.” How widespread? About 200 million Americans were exposed to SV-40 between 1955 and 1963, and estimates put the cancer rate in that population at one in 200 as a result of exposure to SV-40. And researchers have found that it can be transmitted sexually and can be passed down from mother to child.

Evidence of SV-40 infection have been found in children born after 1982, leading some experts to suggest the virus may have even remained in the polio vaccine until as late as 1999, even though it was suspected by some researchers like Dr. Maurice Hilleman and Dr. Benjamin Sweet in the late 1950s.

Yet the myth that polio was eradicated by vaccine drives the modern-day vaccine schedule in which children receive about 26 vaccinations before they reach the age of 18 months, and another dozen or so before age 18.

With strategically planned and executed applied social control systems as the backdrop, what are some of the unintended consequences of adopting a policy of “shots preventing disease?”

Firstly, parents are consistently, relentlessly, and blatantly lied to that their children must be up to date on their vaccines in order to attend school. Rarely are they informed that they have the option to apply for a vaccine exemption (religious, medical or philosophical depending on the state). However, new pharmaceutical-backed School Based Health Clinics are being implemented around the country and parents may soon find that they no longer have a choice in the matter.

Secondly, what about going to the pediatrician? The “Polio Question” is unsheathed immediately by many “brave” pediatricians to pierce through any parental doubt on vaccination. They constantly remind parents of the graphical pictures with children in iron lungs; memories which are etched in our collective consciousness. Parents are then scolded, “You don’t want polio to come back, do you?” When many sincere parents continue to ask questions the pediatrician cannot answer, they are encouraged to be promptly slain.

Third, the “Polio Question” has become a potent weapon of social ridicule. Parents attempting to offer “valid opinions,” empirical observations, and anecdotal stories of their personal experiences with their vaccine injured children have become the object of ridicule. They are marginalized as not “adequately educated” by a bonafide, scientific medical institution. More over, “rebellious parents” are regularly accused of child neglect and free loading on society. They are maliciously threatened with the heavy hand of Child Protective Services and the Judicial System. It matters not that a majority of the parents and family members who are actively questioning vaccines have observed first hand a life threatening reaction to vaccines.

Which brings us to the most egregious strategy of vaccine compliance: persecuting families with vaccine injured children.