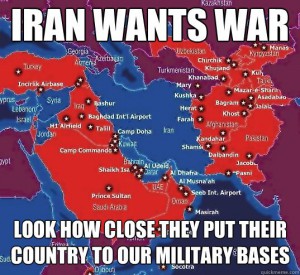 It’s run guns to narcoterrorists in Mexico and fought an absurd war against drugs in Colombia and Afghanistan and at home, where the tentacles of the narcotics mafia now reach into political circles. END_OF_DOCUMENT_TOKEN_TO_BE_REPLACED

America Gone Stupid Over Iran [1] – An Analysis
by Lawrence Davidson

An excellent column sent my way via Gerhard Fuerst, occasional contributor to these pages. The alert liberals are usually on top of the threats to peace; I only wish more than a handful would come out and admit they were wrong about Obama. Not so much for voting for him in 2008, but for thinking he hasn’t brutally betrayed every shred of support he showed for peace, civil liberties, and even a semblance of economic sanity. Again, due to the urgency of the message, this column is an excerpt without asking for direct approval from the author. He of course retains all rights to the piece.

It is estimated that up to a million people died as a function of George Bush Jr.’s decision to invade Iraq. According to Bush, that decision was made on the basis of “faulty intelligence.” This is the ex-president’s way of passing the blame. The decision was made by Mr. Bush’s insistence that the accurate intelligence he was getting from traditional sources was false, and that the lies he was being told by other parties (for instance, Iraqi con-men such as Rafid al-Janabi) were true. END_OF_DOCUMENT_TOKEN_TO_BE_REPLACED